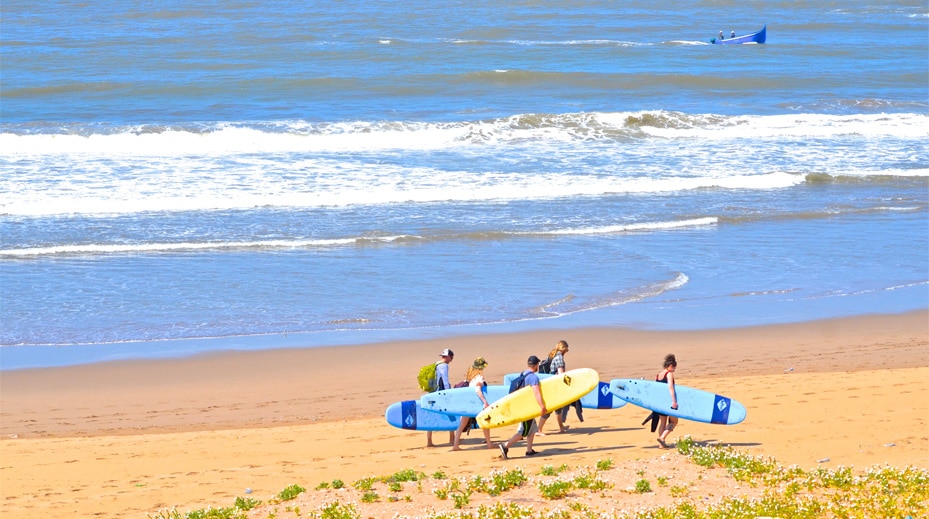 Morocco is widely considered a year-round surfing destination. While itʼs true that there are waves all throughout the year, the best conditions can be found between October and March. This is when powerful Atlantic swells deliver bigger and more consistent waves. The weather is not as hot as in summer, but still warm and with plenty of sunshine. Plus, the beaches are not as crowded. Spring is slightly less consistent, while summer can have periods of flat surf.
For beginners, any time is a good time to surf in Morocco. There are numerous sheltered surf spots, and novice surfers will find whitewater and small waves all year round. That being said, the waves are much friendlier in spring, summer, and early autumn.
For experienced surfers, winter months bring in the big game. This is when the pros gather round to ride the waves at Anchor Point, Killer Point, Boilers, Draculaʼs, and Desert Point, often described as freight trains.
All through the year, the wind doesnʼt get too strong and is almost always offshore. Morning is the best time of day to surf in Morocco, when the waves are ultra-glassy.

This is probably the most famous Moroccan surf spot due to its clean lines and consistency on all tides. It starts working at about 3ft and holds up to 15ft.
This surf break is a mix of sand and reef bottom with 3 different sections where you can go for cover ups and turns at the first two sections and the last one just gets quite hollow and fast. It can be a long wave of about 300m to 500m.

Banana Point is located near the Village of Aourir, also called Banana village due to the many banana plantations that are grown in the river bed facing the spot.
It’s a long right hander point break with no current ideal for all levels. Sometimes you might get surprised with its quality and length.

A shipwreck gave the name to this break, where you can see the boiler of a boat at the start of the wave. This is probably the trickiest and spectacular break around, often visited by pro photographers for the intensity of pictures taken.
Recommended for experienced surfers due to its very strong and fast right hander that ends up onto a strong shallow reef.
The wave can have tubular sections if it’s more than 6 ft and it can reach up to 400m long, but better be fast if you want to connect all the sections there. Get ready to hurry across the reef on your way out before the next set hits. After all said, it’s well worth it and one of the most exciting waves in Taghazout area..

Unlike most of the other breaks, this one is well known for its inconsistency and strong currents. Therefore, it’s normally empty. Though, it is famous for endless right hander and off shore winds that can really produce a perfect wave.
Just like the majority of the other points in the area, it’s a point break that breaks at low tide and starts working at 4 ft and holds up to 500m long.

Right next to Banana Point break, this spot can be a crowded because of its consistency and proximity to the village. Although there’s plenty of room to spread out or just avoid rush hours and you can get some fun surf sessions. It’s a perfect break for all levels, and one of the favorites for surf teaching, since it offers a big diversity of waves from rights on low tide, left and right on high tide.
It holds up perfectly till 1,5m. This wave is a beach break, but under the sand, there are rocks occasionally according to the swell season.

Sharp vertical rocks like vampire teeth give its name to this point break, one of the most demanding for advanced surfers. Prepare yourself for a tricky paddle out and in.
With a northerly big swell, Dracula’s can be one of the most perfect point breaks in Taghazout area and the entire Moroccan coastline with long rides and several barrel sections.
Definitely “a must” for experienced or kamikaze surfers. You’ll understand why it is called Boilers’ evil twin.

This is a well know spot just because it is located right in the middle of the village of Taghazout. Hash Point got its name over people being lazy from smoking too much so that wouldn’t be bothered to walk up to Anchor Point. What was once a perfect point break, now its bottom got covered with sand and became a fast right-hander working well with a medium to large swell when the sand lines up well off the rocks.
Though it’s still fun and easy for beginners which makes it a favorite spot for schools to hit the lineup.
The fact is that because it is in the center of Taghazout means that it is so easy to reach and that you will always find yourself having a relaxed session on it.

One of Morocco’s best point break and considered the most consistent of all the point breaks in Taghazout area. This 300m long wave has a lot to offer from speed sections, bowl sections and barrels.
During low tide on small swells, the waves start at the north end of the cliff and it provides a short left and a sectioning right.
When the swell picks up, vertical walls provide barrels and very hollow sections. It can be a long paddle if the tide is not low enough to walk along the cliff to get to the first sections.

This is an accessible and funny wave to ride for all surfers, especially on rising and falling tides. Small reef sections combining with sandy sections provide a clean wave of about 50m to 150m.
Its name comes from fresh water springs bubbling up from onshore rock formations. This point is right in front of Surf’inn La Source. Put up your wetsuit and paddle to the line up right from the backyard.

This is one of other world class right hander just 100m north of Anchor Point, on the next beach stretch. The take off zone is on a reef break and is fairly more accessible than some other points in the area.
On its good days, it can reach about 250m long with barrels but it cannot handle a very large swell – it closes out over 2m.
Mysteries can get hollow and fast though as well, suitable for intermediates and advanced surfers. One of the most fun and rippable waves in the area.

Panoramas is a right hander, with a sand bottom that breaks on a big beach. This makes it the perfect spot for beginners, but only during high tide.
When it’s more than 5 ft, Panorama’s can be a very fast and barreling when the swell and the winds take the right direction. Then it becomes a good break for intermediate to advanced surfers.
There’s always a good atmosphere on this beach as well because a lot of people chose this place to soak up some sun and surf the Moroccan waves in a friendly atmosphere.

Tamri Beach is the most consistent surf spot ever. When it’s flat everywhere else, we make the drive north till Tamri. Even in summer time, it’s where the local surfers from the Area of Taghazout and Agadir can still get some fun surf.
If the sand banks are good, Tamri can be a pretty good beach break as well. But most of all, it works on different tides, depending on the sand banks and on the swell.
Very reliable and appropriate to all levels. Besides all that, it’s truly wonderful spot, a estuary home to camels and flamingos.

These spots were given their names in kilometres by the distance they are from Agadir. Km11 is one of the few lefts on Taghazout area (good news for goofies). On its good days, you’ll get a hollow take off with a little barrel section on a reef to end up with a fun section on the beach.
Km 12 is a reef break that breaks as an A-frame with a perfect left and right. It has an entire reef bottom, but deep enough and slow waves to be a good spot for intermediate surfers.
Km 12 can hold a decent size swell and is more consistent than km 11. It’s a good spot for starting to work on your first cutties on the left. The right hander really has more wall and is not as easy as the left. 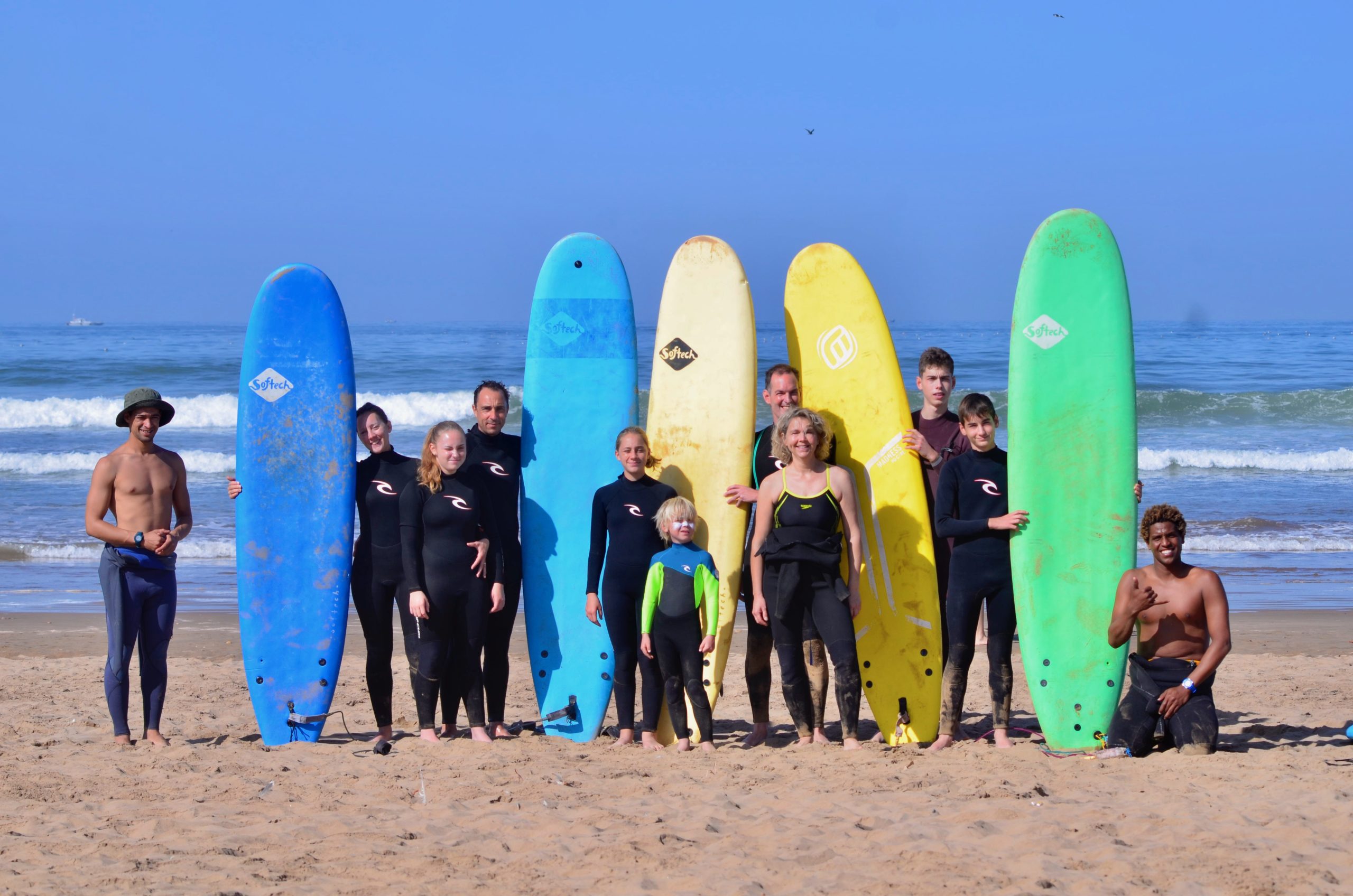 This package is perfect for people who want lessons without accommodations. If you are staying in any one of the Agadir hotels... 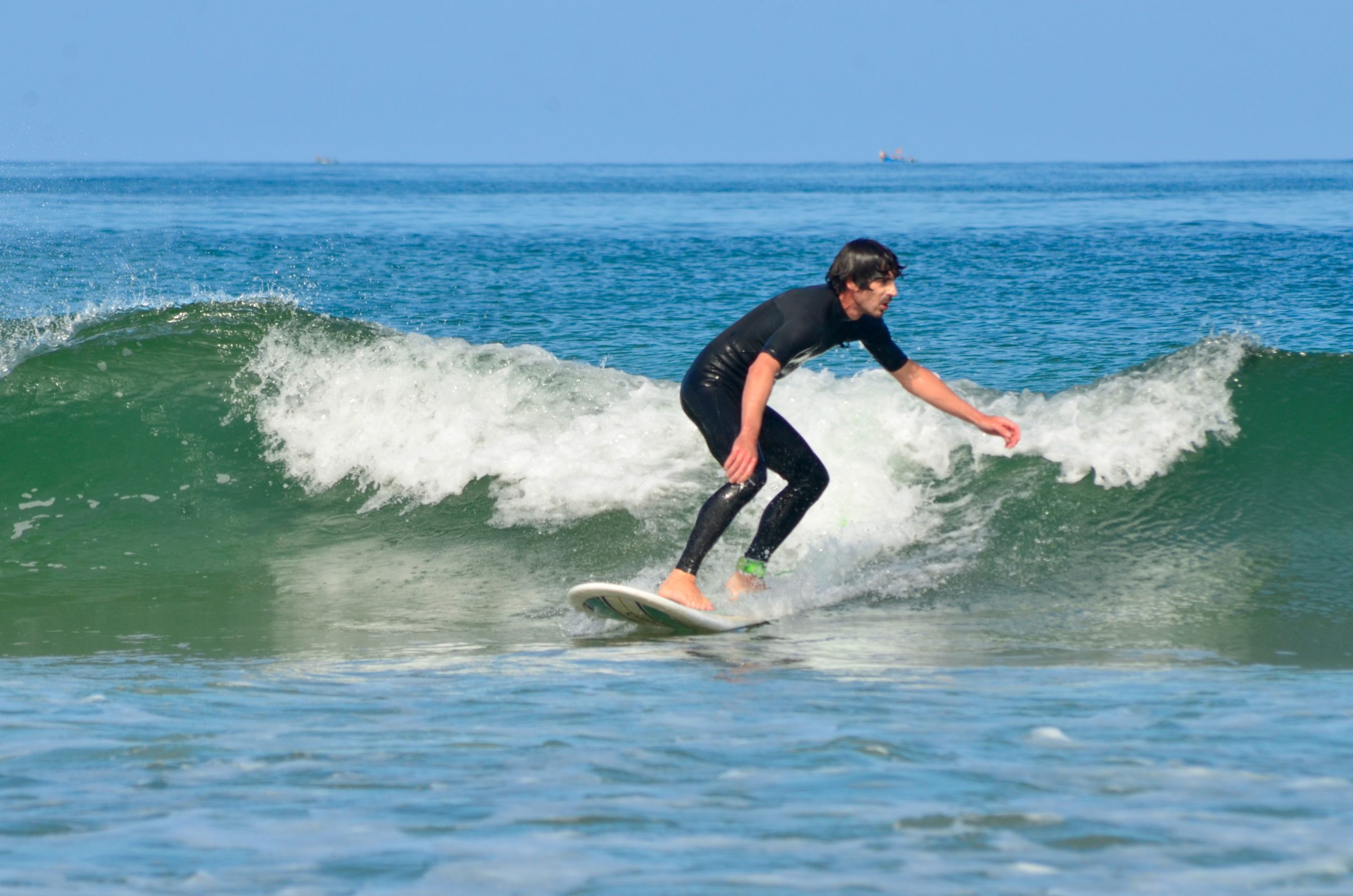 Surfs Up! Morocco is known as one of the best surf destinations on the planet. The incredible variety of waves, amazing... 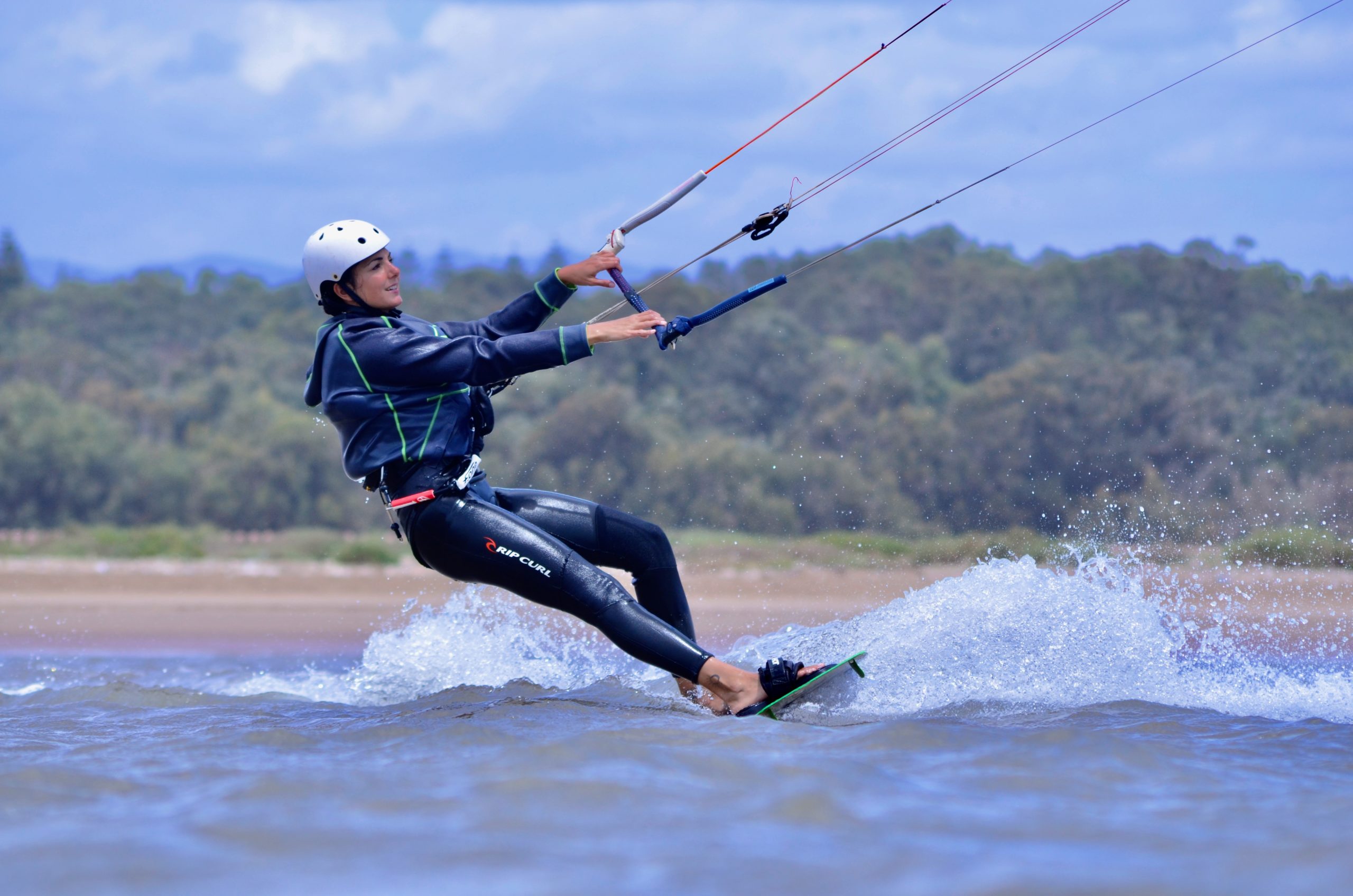 This incredible package is exclusively for people who want to learn surfing and kitesurfing at the same time. For those extreme adventure... 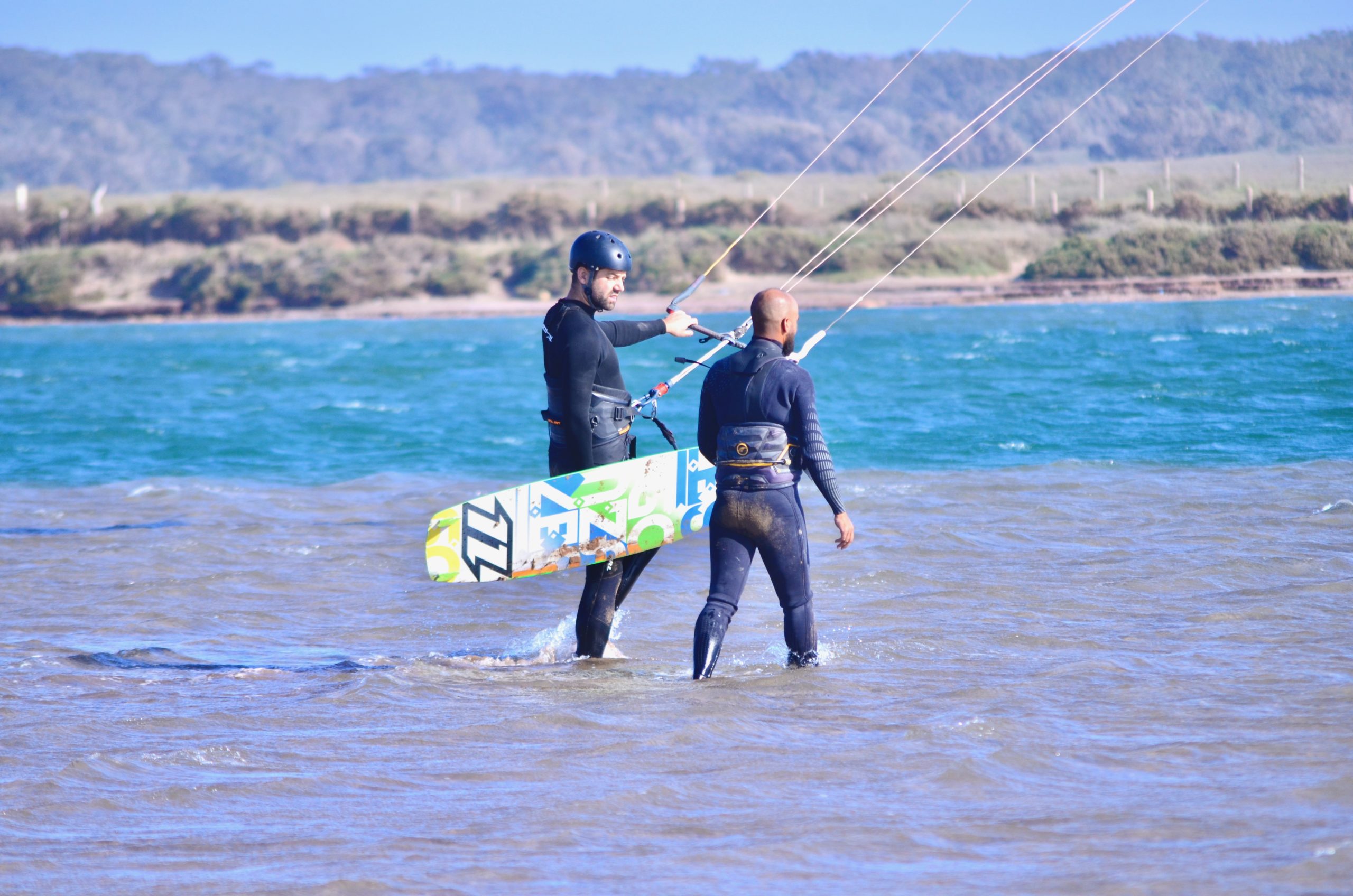 Surf Swell Morocco has exclusive access and permission to utilize one of the best kite flat spots in Morocco. Our secret spot... 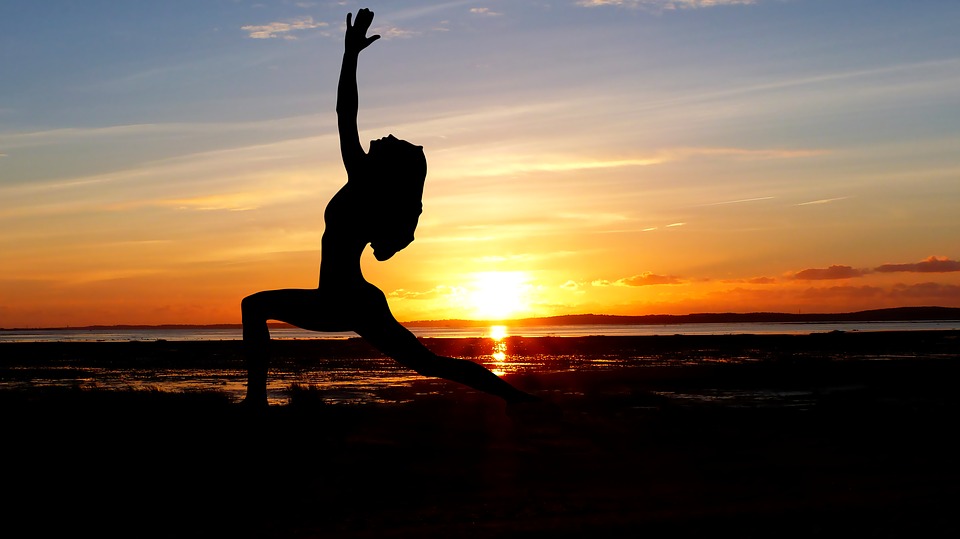 Surf & yoga go together like peanut butter and jelly. Waking up to practice yoga as the sunrises over the ocean... 10 Reasons Why Girls Should Learn to Kitesurf

1. Transform your body Kiteboarding is the best and most fun full body workout ever. Without even noticing that youʼre working out... 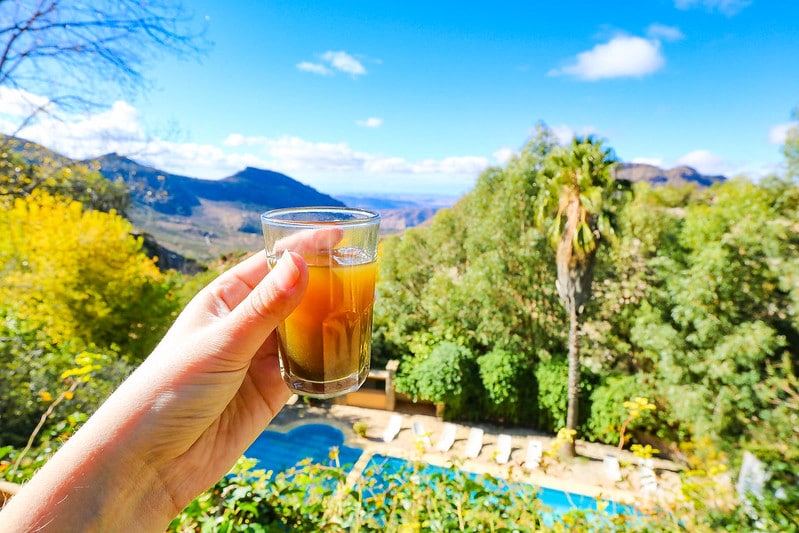 Moroccan cuisine is very healthy, at least in general. Most dishes contain vegetables and rely on whole grains, freshly prepared food, spices and sweet fruit rather... 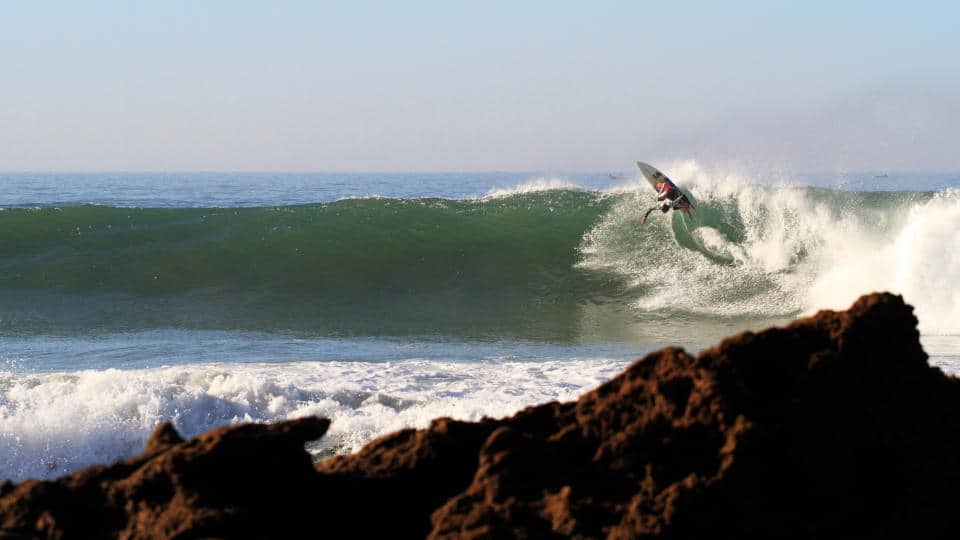 World Surf League is delighted to announce the addition of the men\'s QS5,000 Pro Taghazout Bay to the 2020 Qualifying Series schedule.... 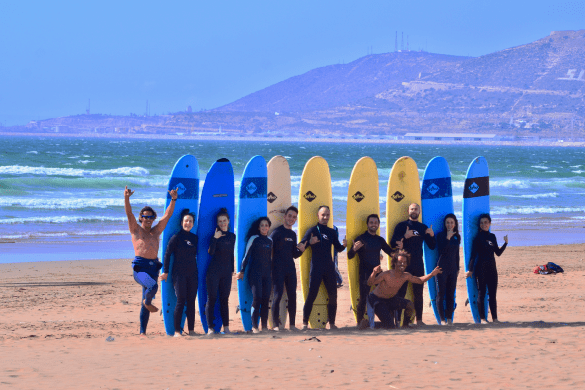 Everybody knows it. We need sports to keep fit and create a…

Everybody knows it. We need sports to keep fit and create a healthy work-life balance. However, when you work and travel this is a problem...

Keep updated with the latest news your inbox